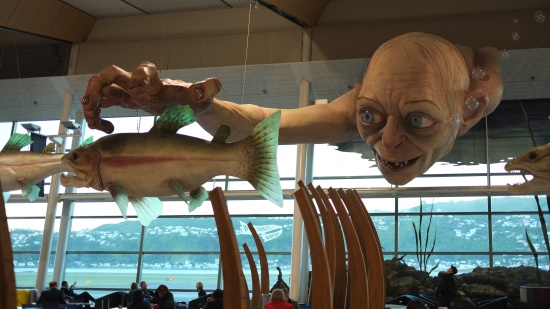 Wellington Airport is an international airport in New Zealand and is the third largest behind Auckland and Christchurch. The airport was formally known as Rongotai Airport. Due to the airport being deemed unsafe and unsuitable for future growth, plans were proposed to construct a new airport on the site of Miramar Gold Course. Once the airport reopened in its new location in 1959 it was then renamed as Wellington International Airport. To make way for the new airport, Rongotai Hill was flattened, requiring three million cubic meters of earth and rocks to be removed from the site. The airport has a single terminal building with a total of 27 gates, 11 of which have jetbridges. The airport has one runway which is 1,815 meters in length, making it suitable for mid-sized narrow bodied aircraft to safely land at the airport. Due to the short runway larger aircraft such as Boeing 777 can only use the airport for short-haul flights. There are plans to increase the length of the runway to be able to accommodate larger wide bodied aircraft in particular the Boeing 787, as this would encourage direct long haul flights to the Americas and Asia. The airport is unique in the fact that it has a giant sculpture of Gollum from Lord of the Rings suspended from the ceiling within the terminal. This airport is well connected to the local area.

CHARTER TO THIS DESTINATION